There’s plenty of anecdotal evidence on the web but – and I’ve checked this out – no academic research looking specifically and objectively at the relationship between linguistic accuracy on websites and consumer confidence. So, a few weeks ago I asked whether accurate spelling, punctuation and grammar on websites are good for business. This is how people responded to polls on SurveyMonkey, LinkedIn and Ecademy, and to the blog:

Do errors in spelling, punctuation or grammar undermine your confidence in a company’s website?

The results suggest that 9 out of 10 people lose confidence in a business when they find linguistic errors on its website, and that nearly 6 out of 10 would continue their search elsewhere. But, of course, this doesn’t tell the whole story – the numbers are relatively small, it’s not necessarily a representative sample and people are probably more likely to vote in a poll if something is important to them than if it isn’t. Interesting nevertheless, especially when you look at the reasons – most of them about why people think accuracy is important.

The only argument that, at least in some circumstances, accuracy doesn’t matter was that it depends on the service being offered. The examples given were plumbing and PR – if you were looking for a plumber it might not matter if the person offering the service could write accurately – it would be their plumbing skills you’d want to know about. If you were looking for PR services on the other hand, skills in language are likely to be significant. But, as someone else pointed out, good plumbing depends on good language skills, especially the ability to understand complex instructions and regulations.

There were some comments where people were ambivalent. An intriguing one was that in the UK people are more tolerant of numerical errors than linguistic ones, that the British are likely to see mistakes in spelling and grammar as a ‘moral fault’. Someone else talked about intellectual snobbery and quoted American author Kurt Vonnegut’s warning against using semi-colons – these, he apparently said, did no more than demonstrate you’d been to college. Another said that sales may not be affected but the business’s image probably would be. And someone else drew a distinction between perceptions of well-known, trusted companies and unknown ones – tolerance for mistakes on company websites with an established good reputation would be greater. By implication, potential customers of a less well-known company would rely more on linguistic accuracy to know whether or not they could trust it.

And then there were the comments – the majority – that were unequivocal about the importance of accuracy. In a vivid analogy, one person wrote of eating establishments: ‘…if someone cannot take the care to spell check…their content – will they take care to wash their hands when preparing my food…?’ This was the drift of most of the other comments, that the care that businesses take in presenting themselves on their websites is an indicator of their approach to providing goods and services. One put it this way – when you buy online, a complete stranger is asking for your money – you’d think twice about the service they’re offering if they can’t take the trouble to write well. This was summed up in another comment – that mistakes in language show carelessness and lack of judgement. And someone who had conducted commercial research into what made people trust one website rather than another found that typos and broken links were crucial. He explained this by saying that accuracy and functionality on the website are seen as a ‘surrogate’ for a good customer process and experience.

Thanks to everyone who voted and/or commented. 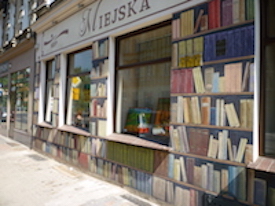 Common sense, instinct and my own wincing reaction to errors in spelling and punctuation – and to garbled expression – on a website tell me that they must damage online sales because they undermine potential customers’ confidence in the company. But I don’t know that this is universally true or even if there is a proven relationship between accurately written copy and the amount of business generated. And – not for want of trying – I haven’t been able to find a robust answer. This is the closest I’ve got…

Last July, the BBC published an article with the headline ‘Spelling mistakes “cost millions” in lost online sales’. This was based on a claim by Charles Duncombe, owner of several companies trading on the internet, that it is possible to quantify ‘the specific impact of a spelling mistake on sales’. He had demonstrated this by comparing sales from one of his websites, one selling tights, before and after he corrected a spelling error. Sales, he said, had doubled after the correction was made. The BBC’s headline was, I suppose, extrapolated from the figures (which the article also referred to) published by the Office for National Statistics in June 2011 showing that internet sales in the UK were valued at £527 million a week.

While I have no problem accepting that sales doubled, I do find it difficult to believe that this was solely attributable to the correction of a single spelling error, mainly because cause and effect in any aspect of life are rarely so directly and singularly related. Moreover, Mr Duncombe’s comments were made in the context of his concerns about errors in spelling and grammar in the applications for jobs he receives. As further evidence of his concerns, the BBC article quoted CBI head of education and skills James Fothergill who referred to recent research showing that 42 per cent of employers ‘are not satisfied with the basic reading and writing skills of school and college leavers and almost half have had to invest in remedial training to get their staff’s skills up to scratch’.

This is what puzzles me. If so many people have skills in spelling, punctuation and grammar that are inadequate for the jobs they are employed to do, and these same people presumably constitute a significant proportion of online customers, wouldn’t you expect errors in website copy to have minimal impact on customers’ choice of where to shop? In short, there must be many people who don’t notice the errors. Add to these the people unbothered by such errors and the role that the spelling correction alone had in doubling sales seems difficult to credit.

There are surely legitimate reasons for lacking trust in websites with inaccurate spelling, punctuation and grammar. This is partly because of their association with spam and phishing – in the same BBC article, director of the Oxford Internet Institute William Dutton described this as potentially ‘a killer issue’ on commercial websites. I think you could reasonably add that inattention to the detail of presenting content is akin to arriving at an interview in overly casual clothes or, perhaps more aptly, without having washed and pressed them. The state of the candidate’s clothes may or may not reflect the ability of the individual to do the job, but it gives the impression that he or she did not care enough to make an effort. And in linguistic terms, the effort to present copy accurately demonstrates an understanding that the company is communicating largely with an unknown audience who, initially at least and certainly with lesser known businesses, have nothing to go on in assessing whether to buy from this company other than the text and images on its website. If the company has not made the effort in relation to language why should the customer suppose it would make the effort in relation to its products and services?

Which brings me back to the dearth of evidence. Maybe it exists but I have not been able to find it. Search on the internet and you will find plenty of comments about the ingredients for an effective website but few that refer to the quality of the language or the accuracy of the spelling, punctuation and grammar. You will find articles and expressions of fury or indifference about the obliteration of  Waterstones’ apostrophe (which, you’ll notice, has just sneaked back in, in a different place, when you weren’t looking). You will find personal opinions and expressions of feeling about the importance of good corporate communication. But, unless you know otherwise, there is nothing on whether it actually makes a difference to sales.

What do you think? If you are on LinkedIn, please vote here. If not, you can vote here instead.